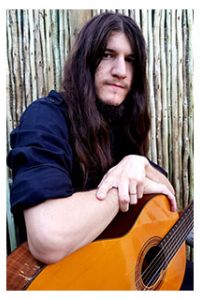 Dylan Lawrence Gibson (born 1992), originally from Pretoria (Centurion), is a classical and contemporary (Metal) guitarist who has been performing and composing since c. 2010. As of recent, he is an aspiring musicologist with an interest in, and a Master’s thesis dedicated to ancient music notation.

By way of education, Dylan initially studied contemporary guitar under Heinrich Pelser and Jazz with Jannie Lategan (Johnny Late). Shortly thereafter, he obtained his BA Music degree (BAMus) at the University of Pretoria in 2014. His focus of study and specialization then was directed towards classical guitar, music education and music technology, with a minor in ancient cultures (BA subject). In 2018 he completed a Bachelor of Music (BMus) degree at Stellenbosch University where he extended his guitar training whilst also specialising in musicology, musicological criticism, music theory and ethnomusicology (with a minor in philosophy and taking up percussion as his second instrument).

With regard to classical guitar training, he received lecturing from established guitarist and composer Abri Jordaan (University of Pretoria, 2012-2014). In addition to this, he also received training from professional classical guitarist Nina Fourie-Gouws (Stellenbosch University, 2015-2018).

Apart from performing, Dylan also has an interest in composing and writing about music (having publishing articles in academic music journals). With regard to music composition, Dylan has received extensive training under established composer Hans Roosenschoon and has been offered opportunities to extend his training by participating in composition master classes hosted by established composers:

In terms of his compositional output, Dylan was invited to participate at the SASRIM (South African Society for Research in Music) 2018 composers meeting – at which his composition “Duodecim Tonus” (for saxophone and clarinet) was premiered. In addition to this, he has also received an Honorable mention for his electronic music composition “SPECTRUM-METER” (for prepared guitar) from the University of Vienna as part of the “Sounds of Matter” Composition Competition (hosted in 2018).