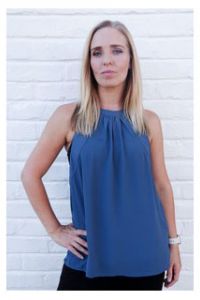 For over 10 years, Angelique’s passion to utilize the performing arts as a means to inspire and bring stories to life, has been evident throughout most of her endeavors and especially as a dancer, choreographer and dance teacher.

After joining Pneumatix (2001), she gained experience in stage productions and performed as dance company member, traveling throughout South Africa and the USA. She led her team as dance captain in her 3rd year.  She also received her Licentiate in theology (SATS) and served as a youth pastor in the Helderberg-region (2004-2006).

Angelique is a qualified ISTD Modern Theatre & Jazz Dance Teacher (Imperial Society of Teachers of Dance in London) at Waterfront Theatre School (2008).  She majored in dance and her training included: Tap, Ballet, drama & vocals, choreography.  She performed as dancer in “5,6,7,8!”- 2007 and “Dance me a song”- 2008 at the Galloway theatre, directed by Delia Sainsbury and Keith Galloway.

She is also qualified as a TDA Hip Hop Dance teacher, and Hip Hop Associate Training Teacher of the TDA (Theatre Dance Association).

A major milestone for Angelique as founder and director of Floodlight Dance Theatre Co. was the opening of the dance studio in 2009.  The studio served as a platform to inspire, equip & excel through dance & performing arts and to help others discover their potential and express their gifts.

After 7 years and the arrival of their little boy, it was time for the company to shift gears from a dance-studio, to a more focused approach on specific projects/productions and events(2017). Joining forces with her husband, she joined Pulse Lifestyle (NPO) as artistic director and also teaches Performing arts at Eagles Rising Leadership Academy (incl. directing & choreographer for their Graduation, opening ceremonies & production). She also teaches Hip-Hop at Reddam House Somerset West.

“With a heart to INSPIRE, making a difference in peoples lives and impacting the community, one work of art at a time…”